Since his death in August 2014, the Hollywood star has still aroused as much admiration. From her angular eyebrows to her strong taste for cigarette pants, Lauren Bacall is an essential icon of 1950s fashion.

Spotted when she was only 18, during a photo shoot for Harper’s Bazaar magazine in 1943, Lauren Bacall has always been associated with the world of fashion. A true icon of Hollywood’s golden age, her style and beauty have spanned the ages.

We loved it alongside “Bogie”, her husband Humphrey Bogart. In the city as on the screen, the couple made a whole generation dream. Even today, the racy elegance of the American actress inspires fashion designers as much as enthusiasts.

From her real name Berry Joan Perske , Lauren Bacall was also characterized by a hoarse voice and a bewitching gaze. First a model spotted for her green eyes and her elegance, hired in particular by Harper’s Bazaar and Vogue US , she became an actress “by chance”.

A leading actress of the 1950s

The late 1940s marked his Broadway debut. A model at the time, she was spotted by Nancy, Howard Hawks’ wife, when she saw her on the cover of Harper’s Bazaar magazine. Howard Hawks is looking for a new profile, his new muse, to play Pygmalion. Legend says that the director would have asked his secretary to organize an appointment, but the latter would have misunderstood and would have paid him a plane ticket directly to Hollywood in order to participate in the audition.

Howard Hawks therefore offered him to play the main character of his next film, and his career was launched. She signs a 7-year contract with him with a weekly salary and, with the help of Nancy who protects her and helps her gain confidence, changes her name, changes her look and dresses in a more sophisticated way. She will also work on her voice and speech.

The director and his wife guide her and embellish her, making her a real Hollywood actress who will revolutionize American cinema of the 50s but also 60s to the point of making her a fashion icon.

Lauren Bacall has always played on both counts, her model physique and her acting talents, unveiling a glamorous silhouette. She displayed a style in tune with the times, both in her films and in everyday life.

The look of the actress from New York is easily identifiable. The actress liked to wear the corolla dress à la Dior and the little black dress . Often she complemented her outfits with a long fur coat.

Her favorite fashion gimmick? Long dresses with a V-neckline and structured shoulders. The shoulder pads added a boyish touch to Lauren Bacall’s style and Bacall always loved the masculine-feminine look that reflected her free-spirited temperament. 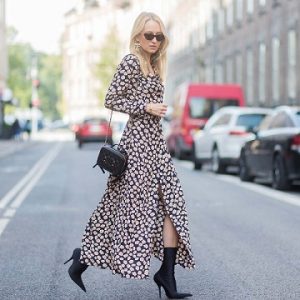